Disclaimer: I do not have a scientific or medical background. In this article I try to explain how I see how reflexology works through the nervous system. Comments are very welcome.

Reflexology is a specific form of foot massage, working various points on the feet that correlate to target organs/glands. Reflexology is designed to harmonize how the body functions and to clear the neural pathways of any congestion. This helps signals between the different parts of the body to travel freely to improve the general functioning of the body and each part of it. 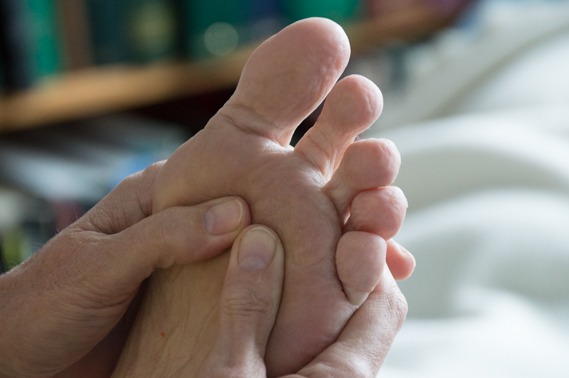 What are neural pathways?

This term is being used more and more but what does it mean?

A neural pathway connects one part of the nervous system with another. Supported by glial cells, neurons or nerve cells make up the nervous system. To make it visually easier, each neuron could be compared to a tree:

There are so many neurons in our body that they touch. As they do, the soma and dendrites of one neuron receive synaptic signals from other neurons. This signal travels to the axon, which becomes alive with electrical impulses (called the action potential) that relay the information to the terminal buttons where chemicals called neurotransmitters are released thus transmitting the synaptic signals to the next neuron or a muscle cell. The signal could be to flex or relax the targeted muscle or for example to withdraw a hand from a heat source. There are different types of neurons. The motor neuron for example has an axon that can be up to a meter long travelling from the spinal cord to the muscle whilst the longest axon in a neuron runs from the big toe to the brainstem.

How is this relevant to Reflexology?

Ever since Eunice Ingham rediscovered Reflexology in the early 1900’s it has been said that the more than 7200 nerve endings in the feet are stimulated when working the various reflexes.

An fMRI study (Nakamaru et al., 2008) concludes that Reflexology has some effect that is not simply sensory stimulation. Three different reflexes were worked on the feet and the fMRI shows that the related areas in the brain are activated.

How does pressure, strong or light, on a reflex translate?

If a neuron responds, it must respond completely. Greater intensity of stimulation does not produce a stronger signal but can produce a higher frequency of firing (electrical impulse or action potential in the axon). When an object touches the skin, neurons fire but if the object maintains even pressure against the skin, the neurons stop firing. This is an argument for working a tender or congested reflex, leave it alone and then come back to it as it allows the body to keep responding to the stimulus of the finger which in turn brings about harmonizing the body.

When working reflexes on the feet, neurons are stimulated in such a way that signals are travelling at great speeds to the various organs, glands and all other cells in the body such as muscle tissue, etc. These signals stimulate parts of the body, clearing up congestion, which, when this has happened promotes healing and relaxation.

relationships between cortical activity and reflex areas in reflexology: a